The Role of Janitors in Infection Control 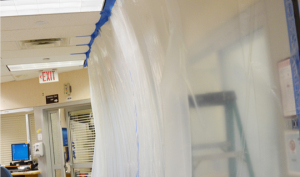 Healthcare-associated infections (HAIs) are declining thanks to the latest measures implemented by hospitals worldwide. More and more healthcare facilities are hiring janitors to fight infections and prevent viruses from spreading. Until recently, most hospitals were investing in technology and reputation management. Such investments attract patients and bring in more money. However, things have changed lately. Healthcare facilities from all over the world are bringing janitors to the front lines of infection control.

Are Hospital-Acquired Infections a Real Problem?

One in 25 patients develops an infection while in the hospital. About 40,000 healthcare-associated infections occur everyday in the United States. Every day, more than 205 people die in U.S. hospitals from infections. These alarming statistics show that hospital acquired infections are a major problem that shouldn’t be overlooked.

Over the past 10 years, the viruses and bacteria that cause most infections in hospitals have become more difficult to treat. Not only they resist treatment, but have also evolved and adapted. For example, methicillin-resistant Staphylococcus aureus was a main source of infection in healthcare facilities just a few years ago. This bacteria clings to the skin. The only way to prevent it was thorough hand washing. Today, this approach doesn’t work anymore. Nurses and other staff members have to carefully check every nook in each room and use special cleaning products to control its spread. Even though hand hygiene still is very important, it takes more than that to prevent and kill bacteria.

Every day, hospitals have to fight dangerous microorganisms that kill patients. These include Acinetobacter, Pseudomonas, Escherichia coli, Clostridium difficile, Enterococcus and many others. Most viruses and bacteria make their way to hospital rooms via people’s shoes and clothes. Some live in the gut and escape when patients have bouts of diarrhea, contaminating the environment. These microorganisms are highly resistant to antibiotics and traditional medications, and can survive in harsh conditions, which forces hospital staff to take special measures.

A recent study has shown that 95 percent of curtains in 30 hospital rooms carried MRSA or VRE, two of the most dangerous bacteria. Over 92 percent of curtains became re-contaminated within seven days after being replaced. Other studies indicate that approximately 10 percent of surfaces in hospital rooms are contaminated with gram-negative bacteria. It’s no wonder why cleanliness has become a major issue in healthcare facilities worldwide.

Most hospitals employ infection-control specialists to identify and track dangerous bacteria. However, janitors seem to play a key role in the whole process. They’re no longer seen as disposable workers, but as critical partners in patient care. In 2010, N.Y.U. Langone has trained and employed “clean teams” consisting of infection-control experts, janitors, and nurses. As a result, the recurrence of Clostridium difficile infections has dramatically decreased within six months.

Other healthcare facilities are trying to use technology as a weapon against hospital acquired infections. The latest projects include scrubs and bedding sets that kill infectious organisms, rooms that clean themselves, and special surfaces that make it difficult for bacteria to cling and spread.